The Head of College acts as the chief administrative officer of the residential college and presides as a faculty presence. She sets the intellectual and cultural tone of the college, lives with her family alongside Ezra Stiles students, and eats many of her meals in the college dining hall. Her responsibilities include the physical safety and well-being of resident students. She also oversees much of the college’s social life, hosting College Teas, trips, and other events.

Stop by the Head of College Office for answers on anything and everything to do with residential life in the college, to purchase Stiles gear or borrow something from our comprehensive lending libraries of board games, sports equipment, movies (& laptop compatible DVD players) tools and other handy items.  You can also use the the fax machine (203-432-7930), buy a stamp, and there is always candy! 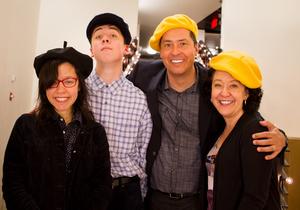 Alicia Schmidt Camacho is a Professor of Ethnicity, Race, and Migration, and holds affiliations with the Center for the Study of Race, Indigeneity, and Transnational Migration, the Council of Latin American and Iberian Studies, and the American Studies and Women’s, Gender, and Sexuality Programs. Her scholarship examines migration, social movements, and cultural politics in North America. She has written articles about transnational labor organizing, gender violence and feminicide in Mexico, border governance, and migrant expressive culture. Her book, Migrant Imaginaries: Latino Cultural Politics in the U.S.-Mexico Borderlands (NYU 2008), received the Lora Romero First Book Prize in American Studies. She is currently writing a second book for NYU Press entitled The Carceral Border, a study of the ways unauthorized migrants have confronted state and social violence along their passage through the North American migratory circuit since the 1980s. Another book project, derived from the 2019 Tam Tran Lectures in American Studies at Brown University, entitled Migrant Justice, examines migrant politics in the Americas, looking at how Mexican and Central American migrants defend human mobility in the contemporary era of mass deportation and border construction. This project takes up the examples of marronage and other historic contestations to state sovereignty to theorize how migrants cultivate freedom within and apart from nation-states. Alicia’s courses examine the histories of race making, colonialism, and slavery in North America, migration and border governance, and the formation of transnational Latinx communities in the U.S. She served as Associate Head for Ezra Stiles College from 2008-2020.

In 2017, Alicia formed the Migrant Justice Initiative, a multidisciplinary project for scholars to document and engage with migrant-led organizing, and to shape better understandings of migrant realities in the Americas. Partners have included the Global Labor Justice Project and the National Day Laborer Organizing Network.  A longtime resident of New Haven, Alicia contributes to local organizations involved in labor, civil, and immigrant rights, and is former Chair of the board of the Connecticut Bail Fund, and former board member of Junta for Progressive Action. She works with feminist and migrant-led organizations to support transborder organizing and scholarly exchange.

Alicia lives with her partner Steve, the former head of Stiles College. Their son and daughter, Antonio and Thalia, grew up in New Haven as members of the Trumbull and Stiles College communities. They attend college in New York and Massachusetts. Stiles residents are familiar with their dogs, Aqua and Eero. Her extended family resides in Philadelphia, California, and Mexico.

Stephen Pitti is a Professor of History, American Studies, and Ethnicity, Race, and Migration at Yale University. He is also the Founding Director of Yale’s Center for the Study of Race, Indigeneity, and Transnational Migration.  He is the author of The Devil in Silicon Valley: Race, Mexican Americans, and Northern California (2003), American Latinos and the Making of the United States (2012), and articles on Latinx history and historiography. He has provided expert reports on the history of racial animus for federal civil rights cases, and he is currently writing a book entitled The World of César Chávez. Appointed a Distinguished Lecturer by the Organization of American Historians and a Visiting Senior Fellow at the Andrew W. Mellon Foundation, he has delivered the Américo Paredes Distinguished Lecture at the University of Texas and keynoted the Latinos/as in Historic Preservation National Conference. He co-edits the “Politics and Culture in Modern America” series for the University of Pennsylvania Press and serves on the editorial board for the journal California History. At Yale he has organized or co-organized conferences and academic gatherings focusing on Mexican Music and Social Justice; Racism and the Radical Right in Europe and the United States; Japanese American Wartime Incarceration; and New Directions in Ethnic Studies.

As a past member of the National Park Service Advisory Board and chair of the National Historic Landmarks Committee, Professor Pitti led an effort to identify, preserve, and interpret historic sites that capture a broad and more accurate history of the United States. He has taught courses about the Smithsonian and is a member of the Advisory Board of the Yale-Smithsonian Initiative. He has chaired Yale’s Faculty Advisory and Selection Committee for the Mellon-Mays and Bouchet Fellowships since 2006. He has worked as a reviewer for the American Council of Learned Societies and other foundations, and he has chaired postdoctoral selection committees designed to support scholars in Ethnic Studies and related fields. He is a past member of the Faculty Advisory Committee on Athletics, the Board of Directors of Freedom University in Atlanta, the Steering Committee of the McDougal Center in the Yale Graduate School, the Advisory Board for the Bracero History Project at the National Museum of American History, the Yale-NUS College Advisory Committee, the Yale University Budget Committee, the Standing Committee on Yale College Expansion, the Faculty Advisory Committee of the Yale-New Haven Teachers Institute, the Yale Creative and Performing Arts Committee, the University Committee to Establish Principles on Renaming (in the aftermath of the Charleston massacre), and the Steering Committee for Yale College.

Professor Pitti received a B.A. from Yale College and both an M.A. and Ph.D. from Stanford University. He has been a President’s Postdoctoral Fellow at the University of California, San Diego and a Visiting Scholar at the Julian Samora Research Institute at Michigan State University.  Professor Pitti served as Head of Ezra Stiles College from 2008-2020.

Marc is entering his eleventh year as Operations Manager for Stiles. He earned a BA in American Studies from Cornell University and a Masters in Educational Policy Analysis and Administration from Stanford University. He has previously held various positions in academic advising and student affairs, including director of academic advising and undergraduate programming for Drexel University’s College of Engineering and director of residential life for Landmark College, a college serving students with learning disabilities and ADHD. When not pitching zany ideas for new Stiles events or ordering vast quantities of dumplings for study breaks, Marc helps out in the community. He’s been the volunteer coordinator for his daughters’ elementary school PTA, the treasurer of his neighborhood civic association, the chair of Yale Faculty Partners, and the coordinator of a weekly neighborhood soup night. He sometimes conspires to create new groups, such as a long-running dads’ night out and, more recently, a group advocating for racial justice for his town’s schools. Marc’s wife, Catherine Nicholson, is a professor in Yale’s English Department, and she and their three kids (15-year-old Miriam, 11-year-old Ruth, and 4-year-old Eli) drop in on occasion to enjoy the Stiles fun and the dining hall pizza and ice cream.

Kathryn Dunn, Senior Administrative Assistant to the Head of College

This is Kathy’s ninth year as the Ezra Stiles Head of College Senior Administrative Assistant. Before finding her home in Stiles she spent two wonderful years in the Yale Department of Music, and prior to that in non-profit consulting and development for The Bushnell in Hartford.  A native of Cape Cod and graduate of Boston College, Kathy is a loyal Red Sox fan and feels most at home on the beach. She lives in horse country with her family, their giant rescue dog Gus, and cat Luna. When not scheming with Marc on extra-special events or redesigning Stiles common spaces to feel more like home for her favorite Yale students, she is a busy mom of three.  Kathy also enjoys gardening, cooking, reading, yoga, theater, and traveling.  Please stop by and see Kathy if you have programming ideas, questions on Creative & Performing Arts Awards or Stiles Summer Fellowships, inquiries on employment opportunities within Stiles, need gardening, entertaining, or decorating advice, or wish to make an appointment with the Head of College.  Kathy is in room 105 in the College Office (Entryway C) and can be reached by phone at 203-432-0560 M-F 9:00–5:00.

A Look at the Head of College’s Office